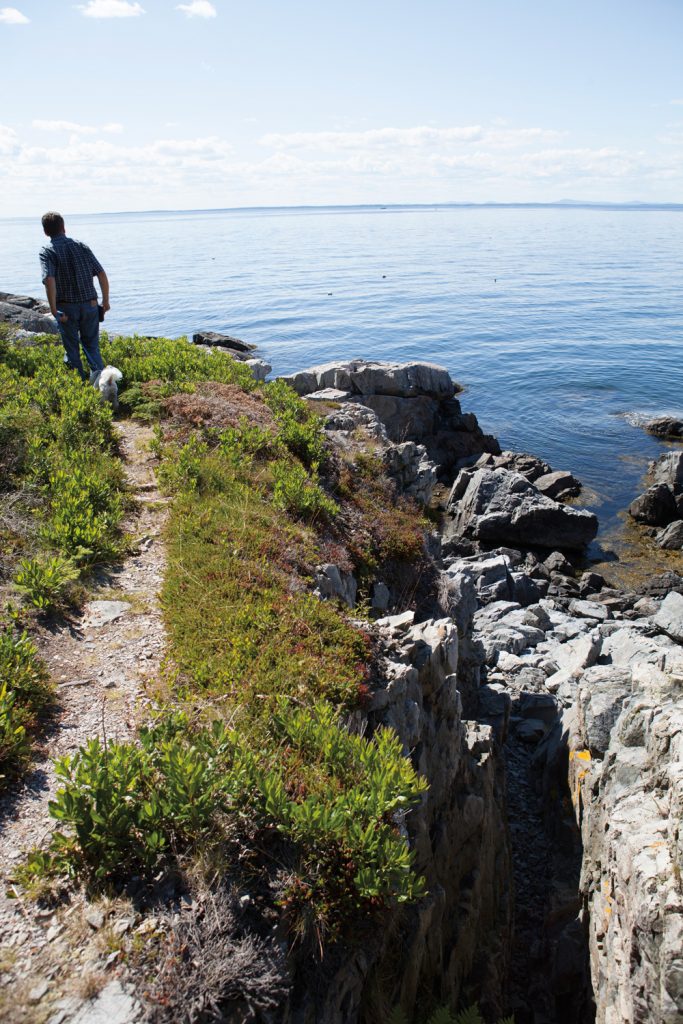 Chubbuck, who moved to the offshore island full-time about four years ago, used to live in a little red house on the shore that was built in the 1930s by her great-aunt and great-uncle. The property was rich in beautiful views, although not with modern conveniences like running water and electricity. One upgrade was a simple outdoor shower she installed on her porch.

But those beautiful views also were appreciated by the tourists who hike and camp every summer on Acadia National Park’s relatively remote outpost on the 113-square-mile offshore island. They also parked their bikes in her driveway and hiked across her front yard, leading to the occasional surprise encounter.

“You have to look out the door to make sure no hikers are coming before you get out of the shower,” Chubbuck said, laughing.

That’s just how life goes on Isle au Haut, where fishermen and other islanders have to share their island—at least in the warmer months—with a few park rangers and about 7,000 park visitors every year. Acadia National Park is celebrating its centennial this year, as is the National Park Service. The part of the park on Isle au Haut is often overshadowed by Acadia’s presence on Mount Desert Island, but not for its residents, who number around 40 in the winter and several hundred in the summer. Most have adjusted to having a national park in their backyard—but that hasn’t always been the case since its creation more than 70 years ago.

Acadia National Park was first established as Sieur de Monts National Monument in July 1916. Three years later, its name was changed to Lafayette National Park, and it became the first national park east of the Mississippi.

Park supporters approached New England landscape architect and Isle au Haut landowner Ernest Bowditch in the last years of World War I about the possibility of expanding to the offshore island. At the time, Bowditch demurred. However, during World War II, his heirs did decide to donate a large tract of land on the southern part of the island to the National Park Service. The move came as an unwelcome surprise to islanders.

“It was a done deal before we knew anything about it,” one islander recalled years later. “We were so mad.”

Some of the year-round residents opposed the loss of the island’s tax base and the erosion of local control, anthropologist Douglas Deur wrote in a 2013 community history.

Realities of island life are very different today than they were in the 1940s. The year-round population on Isle au Haut has been shrinking, and this year, only two children attended the one-room schoolhouse. Despite a generally sanguine relationship between the town and the park, some residents feel that sharing the island is not in the town’s best interests.

Matthew Skolnikoff, a landscaper who has lived on the island year-round for 25 years, said the national park owns nearly half of Isle au Haut and pays $8,000 annually to the town in lieu of taxes. Another 25 percent of the island is owned by other tax-exempt entities.

“I’m not saying the park should pay full taxes,” he said. “But when you have 75 percent of the island nontaxable, there’s a lot of pressure on the rest of us.” 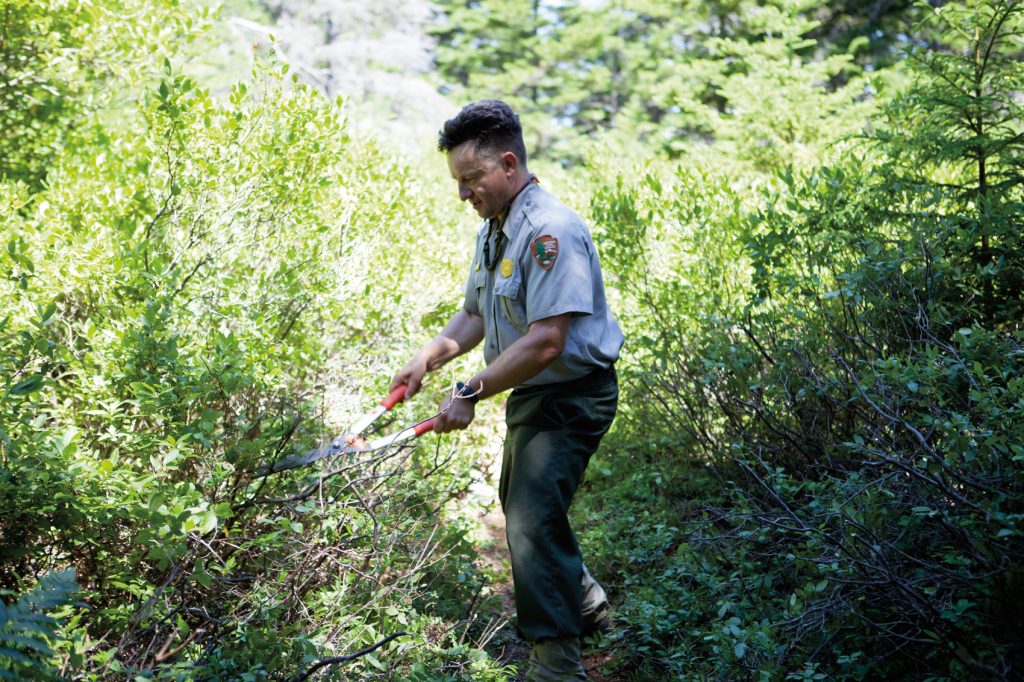 Abigail Hiltz, a college student studying ocean and coastal resources in Galveston, Texas, also loves the island she grew up on and its national park. She is looking for a way to come back home for good, but on Isle au Haut, that’s not necessarily easy.

“You’re constantly thinking about the island,” she said of life away from it.

And she knows the 18 miles of park trails like the back of her hand, having roamed over them in every season. She aspires to be an Isle au Haut park ranger, but her bone-deep knowledge of the island may not be enough to qualify her for employment.

“It’s frustrating,” she said. “I think that living out here and having knowledge of the trails and the history of the island ought to be enough.”

It’s the same story for Patricia Barter, who moved to Isle au Haut at the age of 18 after falling in love with an islander and his home.

Still, she needs a job. For two years in a row, she has applied to work for the park, but has run into the same obstacle as Hiltz.

Although the park has not turned out to be a big job creator, there are undeniable economic benefits. One is that park visitors help to keep Isle au Haut Boat Services afloat year-round. The Stonington-based company that runs the ferry is a lifeline to the island.

“A big portion of our income comes from transporting hikers to Acadia National Park,” Captain Mike Moffatt said before piloting the mink back to the mainland. “It’s a big help. The hikers, they subsidize this ferry service. It’s a good thing.”

Park ranger Alison Richardson shares Moffatt’s assessment about park visitors. As an island resident who did manage to get into the park service, she has worked on Isle au Haut for nine summers, tending the trails and campsites and keeping an eye on the hikers. She is happy to share the island that she loves.

“I always just say, it’s so different than Mount Desert Island. It’s so much more remote and a little bit more wild, more primitive. It’s definitely more quiet. I think the pristine, wild part is what I like best,” she said.

There are five designated campsites at the park’s Duck Harbor Campground, available May 15 to October 15. Campers are limited to one stay per year. Visitors also can stay at the Keeper’s House Inn, a restored lighthouse station built in 1907 that is on the National Register of Historic Places.

“It’s really rugged and just gorgeous,” Richardson said. “I think the people who have come out there have done their research. They’re great people. They know what they’re doing.”

Every year, the seasonal rangers struggle to find housing on the island, and don’t always succeed. One ranger last summer lived on the mainland and took the mailboat back and forth to work.

“That’s why it would be so great to have a local group of people,” Richardson said. “They live here. They know the island already,” she said of Hiltz and Barter. “The past two seasons, one guy was from Utah. The other guy was from Joshua Tree [California], in the desert. They have to spend time learning the trails, the boat schedule, everything. Islanders would know everything already—and we could just get to work.”

Some islanders think the presence of the park could do more for Isle au Haut’s economic development. Before the 1980s, when the park service built a pier at Duck Harbor on the island’s southern end, the only way to get to the park was by landing at the town dock and hiking for four miles. Islanders didn’t always appreciate those visitors.

“There were a lot of people wandering through town, not really knowing where to go,” Richardson said.

Now, with the new dock, most park visitors completely bypass the town. And Chubbuck, who owns Shore Shop Gifts near the town landing, wants that to change. She and others on the Isle au Haut comprehensive planning committee are trying to figure out a way to get visitors to spend an hour or so in town, so they can check out sights like the tiny post office and the church, and hopefully spend some money at the stores.

“We need some economic development in here,” she said. “We’ve got to survive somehow.”

Island living, and the unique challenges of Isle au Haut, are not for everyone. But for some year-rounders, the park is a big part of what makes their island special. Tucker Runge, a lobsterman, said that he uses the park all the time.

“I think I was the only one who hiked there last winter,” he said. “It’s nice to have it to yourself. It’s just a really good resource to have.”

Abigail Curtis lives in Belfast and writes for the Bangor Daily News, where she reports on such varied topics as Amish-made charcuterie, the renaissance of young farmers in Maine and annual town meetings, Isle au Haut-style. When not writing, she enjoys hiking, cooking and working in the garden.