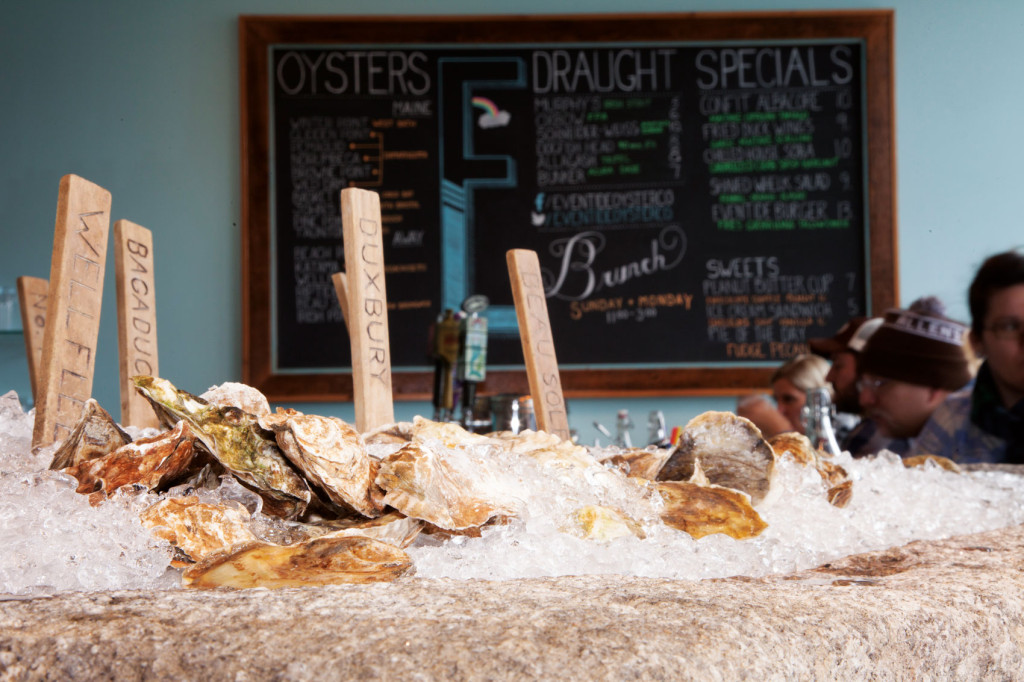 At three in the afternoon on a Friday in January, all the seats are full at Eventide Oyster Company in Portland. Outside, the temperatures are plummeting, but inside the sun shines through the wall of windows, illuminating the small space.

Oysters, ten varieties from Maine and another seven “from away,” all grown in carefully chosen environments, are on display in an ice-filled granite basin. The bearded guy with a pom-pommed ski hat shucking oysters, the capable bartender, the nimble servers—all stay in the background. Here, oysters are front and center.

Each variety of oyster—that craggy and somewhat mysterious shellfish—has a story to tell. But every oyster story must first include a bit of background. What are oysters? Where did they come from? Why are they here, now?

The Eastern oyster, Crassostrea virginica, is native to coastal waters from the Gulf of St. Lawrence to the Gulf of Mexico. Oyster populations in Maine have fluctuated with climate shifts and rising sea levels (evidence: giant fossil oyster shells dredged up from around the Gulf of Maine). The native Wabanaki people ate tons of oysters (evidence: huge piles of discarded shells or “middens” along the coast, especially in the Damariscotta River area).

This evidence, combined with the fact that the Ira C. Darling marine laboratory facility was located on the banks of the Damariscotta, that ancient oyster river, led Herb Hidu and other University of Maine scientists to experiment with culturing oysters in the 1970s. Their legacy can be seen today in the 50 or so oyster farms in Maine producing millions of oysters a year.

An oyster is an island unto itself

full of rocks and earth,

the taste of a place

From Taunton Bay near Sullivan in Hancock County to the Piscataqua River at the New Hampshire line, Maine’s oyster growers ply their trade with a commitment that borders on the obsessive. By nature, oyster farmers are curious, adventurous. They are tinkerers and experimenters. They are always busy: trying out new gear, moving oysters around, evaluating shell shape and meat quality, packing, delivering, selling, talking oysters. They don’t like to be bored.

Fortunately for all of us—growers, sellers, consumers, writers—oysters are never boring. I have had the privilege of visiting a number of oyster farms during the years I’ve been writing about Maine and our seafood. Most recently, I went out to North Haven to see Adam Campbell, who grows oysters in Salt Pond.

Like some other people who get into oyster farming, Campbell was a commercial fisherman in search of another way to make a living on the water. He is part of the “second wave” of oyster farmers in Maine, who are learning from the first wave, the graduate students of Herb Hidu, who went on to start the first commercial oyster farms in the state.

After 15 years as a shellfish farmer, oysters have turned into “a nice little gig” for Campbell, he says, as he continues to work as a lobsterman. Lobstering is more lucrative, but oysters provide “a great way for me to make part of my living,” said Campbell. “I wouldn’t give it up.”

We ate oysters because they were there.

We ate them until they were gone.

Then we found a way to grow them, and put them back

so we could eat them again. 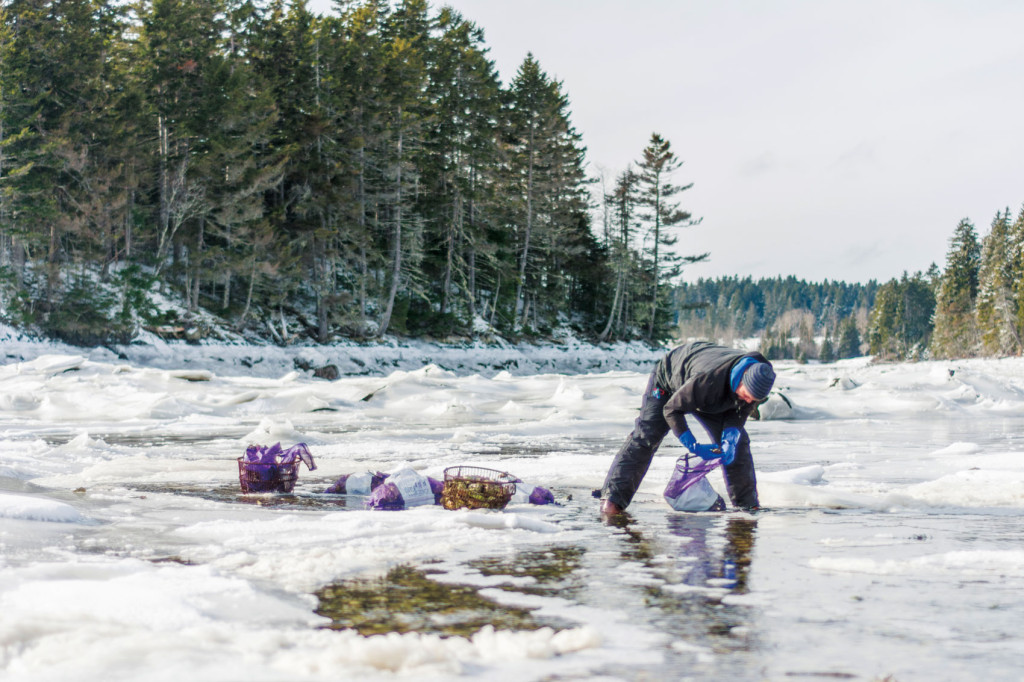 Part of the science of oyster farming is finding a place where oysters will grow, where the water-flow and salinity and temperature are just right, with enough algae for the oysters to eat. The bottom should be somewhere between muddy and rocky. The oyster is a creature of the estuary, the waters in between fresh and salt, the part of the ocean that most of us know, the familiar sea we can see from land, the coastal zone.

Feeding and growth are both tied to temperature. Oysters enter a dormant state below 40 degrees; they can even withstand freezing for short periods of time. In the 20th century, when state and university scientists were trying to start a new industry, Maine waters were too cold for oysters to spawn on their own or grow very fast.

In some places, oysters now take only two years instead of four to grow to market size (two to three inches). Warmer waters are expanding areas where oyster culture is feasible.

A few years ago, it got so warm that Adam Campbell’s oysters spawned on their own. Some of the juvenile oysters settled on rocks and ledges in the tidal flats below the pond. Seeing how well they grew, Campbell used the new site for some of his cultured “seed” (oyster farmers buy their oysters from a handful of hatcheries around the state). The first year he and his crew estimated 25,000 oysters would grow there, but the harvest turned up more than 85,000.

Now Campbell uses the pond as a nursery, and the tidal inlet (he calls it “Oyster Nirvana”) as a grow-out site. He mostly harvests in the winter, hiring a crew to push shelves of ice out of the way to reach the oysters, which sit on the bottom. Campbell rides the ferry to the mainland with his oysters, delivering them to Jess’s Market in Rockland and J.P.’s Shellfish in Portland.

Eating oysters is a synesthetic experience, the sense of taste concomitant with place. Oysters eat by filtering seawater. As water and particles (algae, mostly, but also other bits of detritus) move along the gill surface, the oyster selects some particles to ingest, and ejects the rest. How an oyster does this isn’t totally clear, but likely has something to do with the chemistry between the particle surface and proteins in the mucus covering the feeding organ. Digested, the food deconstructs into protein, iron, selenium, zinc, and other trace elements combined in proportions unique to the oyster’s home.

And so oysters soak up their surroundings, synthesizing land and sea; the red clay of the upper Damariscotta, eelgrass in Taunton Bay, reversing falls of the Bagaduce, shallow sunlit waters of North Haven’s Salt Pond, and the circulation of Casco Bay are captured in their respective oysters.

An island in its own ocean surrounded by shell, every oyster tastes different. Describing the taste, however, is harder than describing wine, or art. Even the best ekphrasis fails to convey the experience. 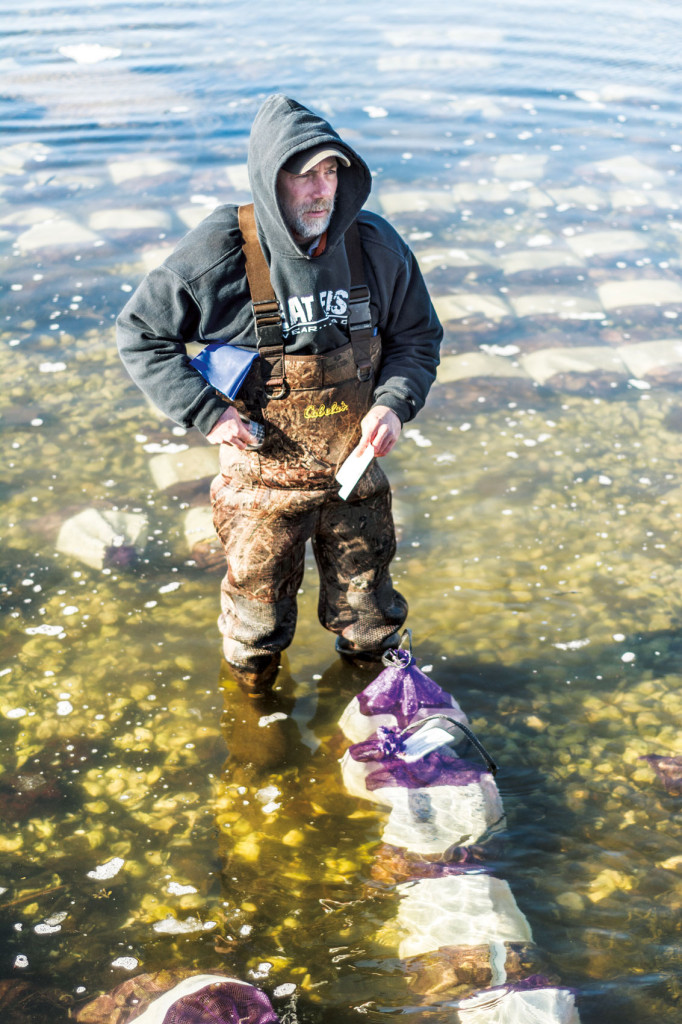 Maybe words for the flavor are so elusive because eating oysters is about more than tasting oysters.

In her classic Consider the Oyster, M. F. K. Fisher wrote, “[O]ften the place and time help make certain food what it becomes.”

Place matters, obviously. Timing matters, too, and yet timing doesn’t matter. Whatever the season or time of day, oysters transform the routine into celebration, the mundane into ceremony. Perhaps it’s the element of danger—eating raw oysters always carries some risk, although Maine has strict standards for harvesting and selling shellfish. Still, it’s best to eat raw oysters at a place that specializes in the ritual, or has an association with an oyster farm.

As successful as Eventide has been since it opened in 2012—in fact, it’s being expanded, as chefs Andrew Taylor and Mike Wiley add to their block of award-winning restaurants—not everyone is familiar with Maine oysters, or how to eat them.

“A lot of people let us choose for them, and that’s fun,” said server Janet Webber, who grew up in Boothbay on the Damariscotta River, and so is familiar with the industry that more and more people are getting to know.

Another dozen down, and I’m getting to know something, too: with oysters, the story writes itself. •

Catherine Schmitt is the communications director for the Maine Sea Grant program at the University of Maine, and the author of A Coastal Companion: A Year in the Gulf of Maine from Cape Cod to Canada.