For a fisherman—on the water daily, subject to the vagaries of weather—a boat is the thin membrane between life and death.

Aesthetics in a fishing boat aren’t the most important consideration. A rugged, well-built structure that’s “seakindly” and will get a fisherman out and back safely and comfortably is. A boat’s finish and appointments are icing on the cake. 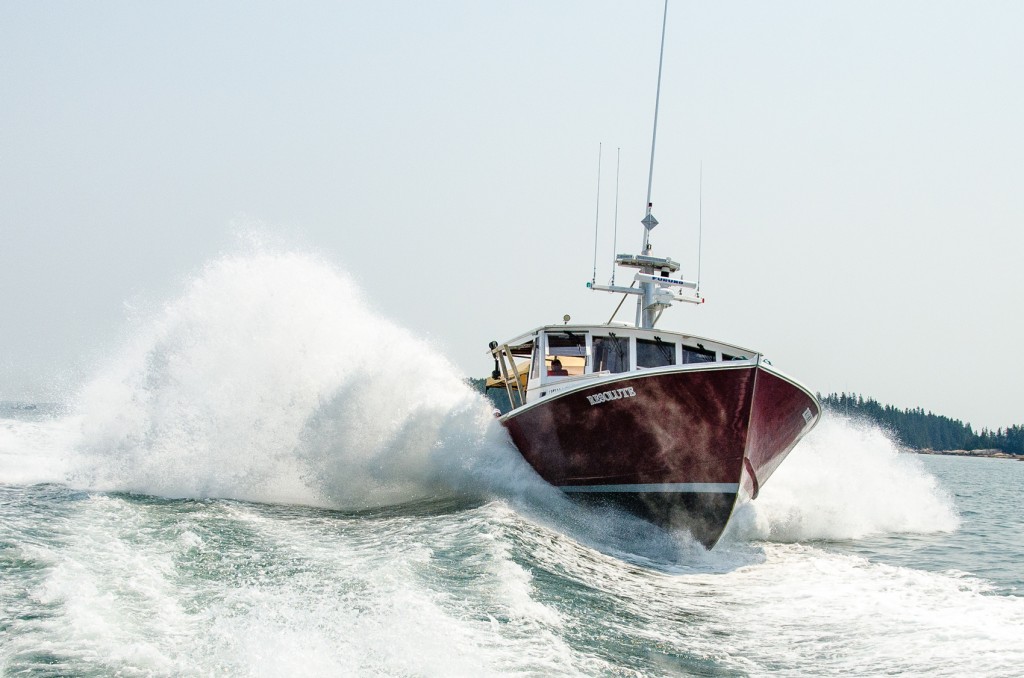 In the traditional plank-on-frame boats built by Peter Kass and his small crew, fishermen get both top-notch workmanship and elegant style. Some of the fleet’s top fishermen—“highliners,” as they’re called—have been known to place an order with Kass immediately after trying one of his boats. They don’t mind paying up to $500,000 for a Kass boat, and they have no problem waiting in line, sometimes for years; none other will do. And in the age of fiberglass, they’re die-hard fans of wooden boats for their ability to deliver a comfortable ride.

The amazing thing is that Kass attracts this devoted following—among both fishermen, his largest customer base, and pleasure boaters—not because he’s doing anything particularly innovative. It’s because he practices age-old design and construction techniques with the highest degree of integrity, turning out boats for customers he thinks deserve both reliability and beauty.

“I can’t imagine anyone, no matter what trade they have, not wanting to do the best they can do,” Kass says. “That baffles me. If you don’t have your reputation and your pride, and everything to show for it, why would you even do it? I can’t imagine saying, ‘Oh, it’s good enough.’ Why would you? This product is you.”

Kass doesn’t seem to age. In his 50s, he’s endowed with boyish good looks and a cheerful demeanor, possibly due to the fact that he loves what he does for a living.

“Sixty hours is a normal week,” he says. “I spend about one hour a day managing my crew and two or three hours on the phone, buying materials. Then I work. About all I ever need to say to the guys is, ‘Okay, you do this and you do that.’ ”

(“I’m a cruddy husband,” he adds. “I’m sitting there at the dinner table, and I’m thinking about the next detail at work.”)

Last August, eight or nine Kass boats were rafted up at the Maine Boats, Homes & Harbors show in Rockland. Kass, the owners, and their families were hopping between decks for visits on a blazing hot Sunday. Among the fleet was Kass’s latest, outer fall, built for Spruce Head fisherman Jim Tripp. At 47 feet, it’s the largest boat Kass has ever built. With a cedar-over-oak hull painted cherry red, bright-varnished sipo (an African wood that’s an alternative to mahogany) interiors and furnishings, teak trim, paneled doors, and a Douglas fir platform (and fiberglass judiciously deployed along seams where freshwater can cause problems), it was also a gem-like standout against a backdrop of sparkling blue waters.

Tripp is more vagabond than businessman in his appearance. A bandana wraps his brow, keeping unkempt hair in place. He’s not afraid of hard-used clothes.

“You’re not going to get any truth out of me,” he jokes, after greeting two other Kass boat owners, Steve Rosen and John Williams, aboard Rosen’s boat, star fisher. A lifelong fisherman, Tripp is a man who knows what he wants. Boats aren’t just vehicles. You have to get to know your boat, he says—how it feels, how it maneuvers, what it will do in a big sea.

“You’ve got to pay attention,” Tripp says. “Every little move you make, your boat does different things, different days. It’s a learning experience.”

Except for a brief stint with fiberglass, Tripp has always had wooden boats, including an Arno Day 36 and a Bobby Rich 43, named day star, which he bought secondhand to range offshore on overnight trips, hooking longlines.

In the 1990s, Tripp came across a Kass boat that struck his eye.

“I thought it had the prettiest lines I’d ever seen in a boat,” he says. Two years later, he put in an order for a 42-footer. Named sea wife, it worked out great for the next 20 years. “I loved that boat,” he says. “I was never, ever scared in that boat. It’s a good sea boat. It takes the weather.”

A year ago, though, he decided it was time to get something a little faster and a little bigger for his trips offshore.

“You’re making your big money when the weather can get really bad, November and December,” he says. “You’re fishing all winter in brutal weather, and you’ve got to haul when it’s blowing 25, 30 miles an hour. You need something bigger.”

Construction of outer fall—named after an important fishing ground—began in July 2014. Tripp helped out the last couple of months of production, putting the rails on, sanding, caulking the deck.

“It’s hard work,” he says. “Everything’s handmade. I felt bad when I took it. The guys who work on it, they put their heart and soul in this boat. You leave and they never see it again.”

Why is wood valued over fiberglass? The consensus is that wood provides a softer ride, absorbing vibration and noise, compared with the monocoque, drum-like nature of fiberglass that jolts a mariner’s joints.

Or, as Tripp says, “It just feels human to me.”

Kass got into boatbuilding for lack of a better idea, as he wryly says.

“Seemed fun. Got a job at a boatyard and really loved it.” 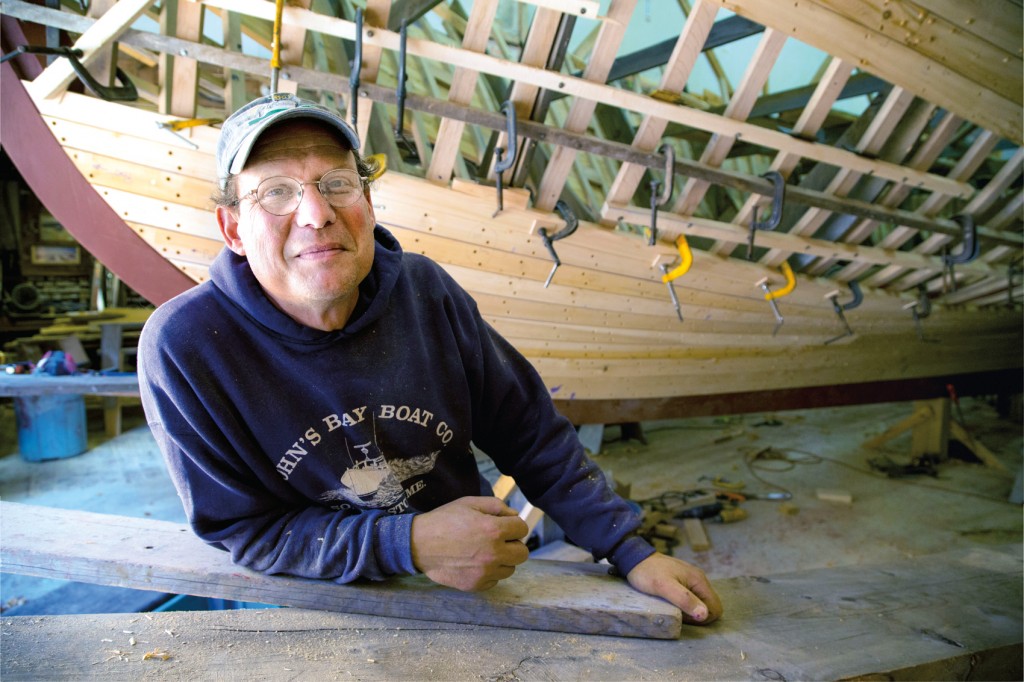 Born in Massachusetts, he was always one to tinker and get his hands dirty as a kid. At 17, he “kind of ran away” to Virginia, where somebody who knew somebody got him a job that didn’t last long. He found his way to Maine and started work at the Harvey Gamage Shipyard in South Bristol. It was the late 1970s, and Maine was something of a mecca, thanks in part to WoodenBoat magazine, for people who wanted to pursue wooden boat building in the face of the rise of fiberglass.

“There were three old-timers—real, lifelong, excellent boat carpenters,” he recalls. “The youngest was 58, the other two were mid- to late 60s. Basically, us young guys would lug things for the older guys. And that was a super way to learn. We were right there with them. You couldn’t get a better learning experience.”

When Gamage switched to steel construction, Kass took a job at Goudy and Stevens in East Boothbay, where his duties ranged from large-scale repair jobs on draggers to working in the joiner shop. In 1982, he was hired at Padebco Custom Boats in Round Pond to help build a 30-foot Atkin cutter.

A year later, he stepped out on his own and opened John’s Bay Boat Company in South Bristol, on several acres—with tidal frontage he says he never would be able to afford today. In the early years, his mainstay was repair work, while building small boats in the 20-foot range. He received his first big commission in 1986, a 42-foot Carroll Lowell design named sharon rosanne, for a Portsmouth, New Hampshire, lobster fisherman.

“As soon as the boat was launched, people took notice: ‘I remember the wooden boat I used to have, and that was a nice boat, and blah blah blah,’ ” he says. “Before you know it, customers were lining up. I didn’t realize the demand was there.”

Steve Rosen of Vinalhaven was an early customer. He’s had a Peter Kass boat, named star fisher, for nearly 20 years. At the time, Rosen says, Kass was the only show in town as far as building in wood.

“When I wanted another wooden boat, I turned to Pete,” says Rosen. “He had a reputation for building great boats and for doing it on time.”

John Williams agrees. When it comes to providing what is an essential tool for a business, integrity is critical.

Williams, who lives in Stonington, commissioned a boat from Kass in 1995. In 2012, he traded up to a larger boat, featuring the gleaming mahogany cabinetry that’s a Kass hallmark.

“As far as boatbuilders, there’s no one better than Peter,” Williams says. “His workmanship is immaculate.”

Building mostly in the 30- to 40-foot range, Kass’s design process starts when he carves a half model. For a more complex product like a yacht, he might hire someone to do computer drafts that make it easier for the customer to visualize the design and make changes. But most of his production is lobster boats, and design and construction remain fairly consistent, with one to two emerging from his shop per year.

Kass’s designs are characterized by a deeper V to the bottom and a sharper bow than many other lobster boats.

“To me, that makes a better sea boat,” he says. “I think they go easily at slow speeds. If you want flat-out speed, and some guys do, you want something that will jump out of the water,” he explains.

“You look at a lot of these modern designs, they’re very flat-bottomed, and when they get going, the whole first 10, 15 feet of the boat is out of the water. And they go great! But I think on a choppy day, a fisherman will be much happier in one of my boats,” Kass says. “As one of my customers says, ‘This fast-boat stuff is cool, but lobsters were never caught at 20 miles per hour.’ You’ve got to be able to stand at the pot hauler once you get there. You don’t want something pounding at your feet.”

Construction is all about one detail at a time, says Sam Jones of South Bristol, who recently retired as Kass’s right-hand man after 25 years.

“Everything is thought out,” Jones says. “We’re not trying to reinvent the wheel, just sticking with what works in the design and the materials.”

More than anything, Kass strives for the best—so much so that sometimes, looking at his costs, he realizes he’s shot himself in the foot.

“Some of these details, after I’m done, I look at the timesheets, and say, ‘Oh, my God. Well, we’ll shave some hours off the bill,’ ” he says. “But I do always tell my guys, if I’m not around to make a call, assume it should be better, and if there’s a money problem, I’ll work it out. Either the customer is good with it or I eat some [of the cost] or whatever, but we don’t want a quality problem. Never.”

By now, Kass has built over 60 boats, about a dozen of them in Stonington, due to a cascading effect that happened when John Williams’s father, Bob Williams, brought his first Kass boat to town 25 years ago. He currently has five orders lined up, which is five years’ worth of work, unless he can find qualified employees to speed up the production schedule. That last point is difficult these days. Finding younger people interested in getting into the trade is his biggest problem.

“Impossible,” he says. “Working in the trades doesn’t appeal to young people anymore. I think it’s because everything they know comes off that stupid glowing screen. I can’t believe there aren’t young people knocking on my door. Jeez, I can’t wait to get to work every day.”

What’s lost, he says, is the sense of craft as a normal part of everyday life. Many people today refer to the “art” of wooden boat building. Sure, it’s creative, he says. But it’s just what people did—to work, to support a family, to live. Kass refuses to be called an artist. For him, the highest honor is to be recognized as an excellent and honest tradesman.

“These old codgers I used to work with, it was just there,” he says. “They were craftsmen, but they didn’t really think about it.”

Laurie Schreiber has written for publications in Maine and beyond for more than 25 years. Her new book, Boatbuilding on Mount Desert Island, is a collection of historical profiles with a touch of contemporary activity.