Zach Lunt’s hands are covered in blood and bile and fur.

“The fun part is over for me,” he says, midway through field-dressing the buck he just shot. “It’s all work from here on out.”

But the work will take far longer than he thinks: Even though the kill was quick and easy, trying to make it legal won’t be.

After bacon and eggs and coffee, Zach and I walk silently through the woods of Frenchboro, only stopping to inspect a deer trail or hoofprints or scat. The plan is to walk east from the gravel pit in the middle of the island to the back side of Rich’s Head, where the wind won’t be blowing quite so fiercely. Sunlight has just started to filter through the pines.

I have a bag packed with snacks and water and layers of clothes and lots of camera batteries, prepared for sitting in a blind for hours, waiting.

But we don’t even make it to the Head. Just after coming down to the isthmus of beach stones that connects the Head to the rest of the island, Zach pauses for a second, shields his eyes from the sun’s glare with his hand, then takes up his shotgun, gives the scope a brief glance, and fires between two trees. I hadn’t even seen the deer.

We walk over to where the deer lies. A three-point buck, his fourth antler broken. Zach hit him in the heart and he dropped where he stood. He’s still taking his last few breaths.

“Let’s leave him be for a minute,” Zach says.

At the crest of the hill overlooking Rich’s Head, Zach takes in the field below, old cellar holes from a settlement that was once here, now covered with puckerbrush and skunk spruce.

“This won’t be quite as long of a day as we thought it’d be,” he says.

He’s a little disappointed. He hasn’t seen a single deer all season and now, in the first 20 minutes of hunting, he’s reached his limit for the year.

Zach, along with his brother Nate, grew up on Frenchboro. They know every inch of the island, roughly two-thirds of which is preserve land. Their father started taking them hunting when they were young to scout out good spots, and to teach them how to shoot.

“I might have been a little loud and impatient,” Zach says of those first forays into the woods. “Patience is a big part of it. I think I’ve gotten better at that as I’ve gotten older. You realize that the waiting around is the best part.”

Like many hunters, Zach feels the sport is less about killing an animal and more about being outside and feeling the rhythms of nature, as well as having a day off from lobster fishing and away from the stresses of raising five kids and tackling a list of house repairs. But on Frenchboro—eight miles from the mainland, with just three state ferry trips a week—it’s also about subsistence.

“I don’t think you have to go back too many generations to get to where they depended on deer meat,” Zach says. “It’s still a big part of our diet, to make ends meet. We don’t have a store, and there’s not a soup kitchen here in the wintertime. It’s a meat you can harvest right here.”

Zach folds up his knife and washes his bloody hands in the water lapping up on the beach of Eastern Cove. Then he texts his wife, Laurette, asking her to wake up their 15-year-old son, Austin, and send him clear across the island on the four-wheeler, to help haul the deer back.

When I first met Austin, the couple’s youngest son, he was an impish second grader at the one-room schoolhouse where I, as an Island Institute Fellow, helped teach him and a dozen of his classmates. Now here he is, almost as tall as I am, but the same island kid.

“I thought Mom was kidding,” he says, working with Zach to tie the deer on the back of the four-wheeler. 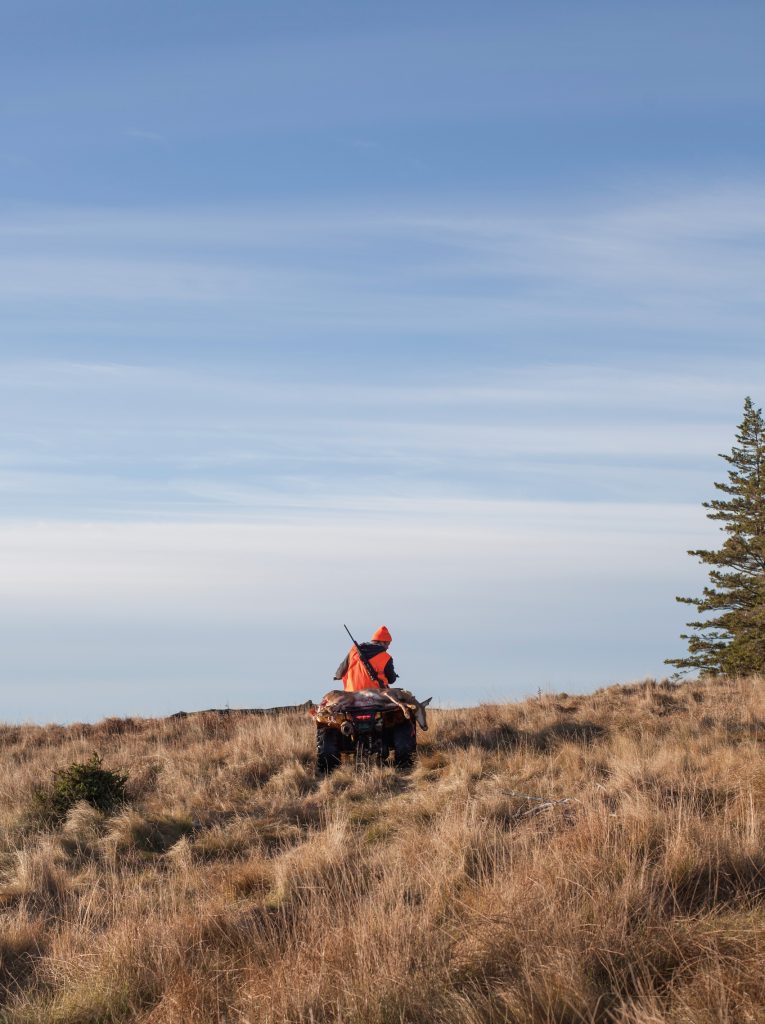 Austin had his first day of legal hunting on Youth Day this year, a few days before the regular firearms season started. With Zach’s assistance, he had a head shot lined up on a buck near the apple trees around the harbor, fired, and the deer ran off. They tried to track him, with no luck. But a quarter-mile away, they found three small drops of blood on a leaf. They figured the shot must have grazed him somewhere.

“Look, Austin!” Zach says, feeling around the top of the deer’s head. “There’s a scar! Must be the one you nicked a few weeks ago.”

“Glad I didn’t get this one,” he says. “Means I wouldn’t have gotten that big buck.”

Earlier in the season, Austin got a sizable eight-pointer along the Gully Road, and doesn’t miss the chance to remind Zach of his success.

“Okay,” Zach says, starting up the four-wheeler. “See you back home.”

Zach drives halfway up the hill, but there isn’t enough rope to secure the deer and it starts to slip off the back of the four-wheeler. Without saying anything, they start scouring the beach for additional rope. Luckily, the beaches here are covered with lobster gear and buoys, with plenty of rope for the taking. They secure the buck and Zach disappears into the trees, his blaze-orange vest and hat glowing in the dark of the woods.

In front of Zach’s house, several fishermen stop their trucks and get out to take a look at the deer. Many are hunters themselves, and they trade thoughts about the patterns of the herds and the spots on the island where they’ve seen traces of activity.

For years, most of Maine’s islands did not have deer-hunting seasons, and finally, the numbers got out of hand, with upward of several hundred on one island. On Frenchboro, many became incredibly tame. Zach remembers deer eating bread out of people’s hands.

And they weren’t healthy. Interbreeding produced albino deer. There wasn’t enough greenery to keep them fed, and nobody could grow anything in their gardens, because the deer ate everything in sight, using garden plots as their toilets. And then there’s the increase in Lyme-related illnesses in recent years; in Zach’s family alone, his wife, twin sons, and sister-in-law all have Lyme disease.

When hunting was finally legalized on the island in 2000 as part of a wildlife-management plan that several island communities adopted, hunters were allowed to get up to six deer for the first two years. Buck or doe, it didn’t matter. The idea was simply to thin the herd, and they succeeded for the most part. But as the number of year-round Frenchboro residents decrease and guys like Zach struggle to find time to hunt, the deer population has swelled once again. You drive around at night and the headlights of your truck will pick up half a dozen standing in the middle of the road, eating fallen apples.

Zach takes the deer down the boat ramp to rinse it off in the shallow water of the harbor. Then, with Austin’s help, he strings it up in his fish house.

The sun that was warm and welcoming earlier this morning has all but disappeared and the wind is picking up again. Time for another cup of coffee.

Around the kitchen table, I ask about tagging. Every county in Maine has a handful of tagging stations where hunters are required to fill out paperwork and pay a $5 registration fee, to make the deer legitimate in the eyes of the state. Of course, on the islands, it’s easy to get away with bypassing this altogether. With no game wardens—let alone a police force—on Frenchboro, who would ever know? But Zach wants to do the right thing. As his kids start to hunt on their own, he wants to set a good example.

“I know for a long time the tagging was done at John’s house,” I say.

“Yeah, now it’s at my brother-in-law Mikey’s house. He’s in Machias and won’t be back until tomorrow. Gotta have it tagged within eighteen hours of shooting it, but that’ll be close enough.”

“You know,” Laurette calls out from the next room, “I don’t think Mikey will be back until next week, after Thanksgiving.”

Taking it to the mainland would mean an hour-long trip to Bass Harbor on Zach’s boat, loading it into the bed of a borrowed truck, and another half-hour to Trenton. And then in reverse, the deer in tow. Out of the question.

Zach is immediately on his phone. After texting a few guys on Frenchboro, he calls Les at Underwater Taxi, a wharf and store on Swan’s Island.

“Hey, you know who tags deer over there?”

The fishermen’s co-op does, and 20 minutes later, we’re on the angela rose, Jay Fiandaca’s lobster boat, which he’s taking over to Swan’s to show to a potential buyer. The deer fits easily on the stern end, Jay’s dogs taking turns sniffing at it.

When we pull up at the co-op, there are cheers from the wharf, people congratulating Zach. He steps off the boat and pulls out his wallet, faces us, and grimaces.

“Left my hunting license on the kitchen counter,” he whispers.

“Maybe I can sweet-talk ’em,” Zach says, walking up the ramp.

Inside the co-op office, Kenny begins putting the paperwork together while Zach describes the hunt, the size of the deer, his reason for being over here to tag.

“But you’ll never guess what I did,” Zach says slowly.

“Forgot my license at home.”

Kenny shakes his head and drops the forms.

“Can’t do it then. Can’t tag it without that little piece of paper.”

Maybe Paul Joy, who’s about to leave for Frenchboro to show the new mail carrier the route, can pick it up from Laurette on the town float?

“He won’t be back for more than an hour, and we’re supposed to close in twenty minutes.”

“Can she send a photo of it on the phone?”

“Got a fax machine?”

A couple minutes later, the fax comes through with a copy of Zach’s license. They get the paperwork in order and walk outside to put the tag—nearly identical to the state-issued plastic strips that are looped through the wire mesh of their lobster traps—on the deer’s hind leg.

But the boat’s gone. Along with the deer. Jay had figured the paperwork would take a while, one of the co-op workers tells us, and has headed into the middle of Jericho Bay to show off the boat.

Although it’s lunchtime and he’s off the clock for the rest of the day, Kenny is legally bound to tag the deer now that it’s registered on paper.

Not in a tree stand or a ground blind or even in the woods, but on a wharf, waiting for the red of the angela rose to appear around Hockamock Head, watching as Swan’s Island lobstermen stack traps in the back of their trucks.